See more and SAVE with a great value 4 Parks Pass to the Penguin Parade, Koala Reserve, Churchill Island and the Antarctic Journey. 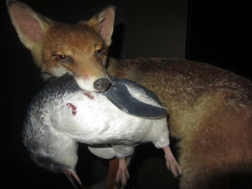 Red foxes were introduced to Phillip Island in the early 1900s and have had a major impact on Phillip Island’s unique wildlife. Foxes are the little penguin’s biggest threat on land. By the 1980s nine of Phillip Island’s ten penguin colonies had become extinct and the last remaining colony on the Summerland Peninsula, which encompasses the Penguin Parade, was under threat.

"Foxes are the little penguins’ biggest threat on land."

Farmers and rangers began controlling the foxes in a coordinated approach that has yielded over 1000 foxes in the last 20 years.

In 2006, Phillip Island Nature Parks initiated a Fox Eradication Project which focused on a range of integrated techniques to remove foxes from Phillip Island. If successful, this will have great benefits for little penguins, short-tailed shearwaters and other Phillip Island wildlife populations.

"If you see a fox on Phillip Island please phone 0419 369 365 immediately and help us remove the little penguin’s number one killer."

Feral and roaming cat management
Feral and roaming domestic cats are a significant problem to wildlife as they hunt small mammals, birds, reptiles and frogs. Feral cats can spread diseases such as toxoplasmosis, which can infect humans and other mammals, and feline HIV that affects domestic cats. Rangers conduct a feral cat trapping program each year to help protect the wildlife in Phillip Island Nature Parks.

Rabbit control
Rabbits are Australia's most serious pest animal. They destroy vegetation and gardens, cause soil erosion and compete with native animals for food and habitat. Rabbit control is the responsibility of individual land owners. Phillip Island Nature Parks is working toward rabbit control on land managed by the Nature Parks.

For more information or advice on rabbit control on your property, or setting up a baiting program in conjunction with neighbours in your area, contact the Bass Coast Landcare Network Pest Plant and Animal Control Officer or the Department of Environmnent and Primary Industries. Further information is available in the Urban Rabbit Control brochure below.