The Penguin Parade, Koala Conservation Reserve and Churchill Island will re-open with limited capacity on Monday 28 September. Entry via online tickets only.

Seal Rocks is home to a healthy population of an estimated 30,000 seals. Seals often "haul out" to lie on beaches or other areas to rest or moult, moving between land and sea of their own accord. This is normal behaviour, and is especially prevalent over the summer months as the seal pups have been weaned and are fending for themselves.

What to do if you see a seal on the beach:
• Leave it alone and maintain a distance of least 30 metres to allow the seal to rest
• Keep dogs restrained and at least 50 metres away from the seal to avoid frightening or injuring it
• Do not feed the seal as it may become habituated to humans and unable to fend for itself in the wild
• Do not attempt to move the seal back into the water or throw water over it – they can self-regulate their body temperature

Sometimes they can also look injured when they are actually not. For example, seals secrete a watery substance from their eyes which is often mistaken for crying or an injury, but it is a natural mechanism to protect their eyes.Seals are also regularly bitten or scratched by other seals. Such wounds heal quickly and don't need human help.

Up to 6,700 pups are born each breeding season and it is natural that not all of these pups will survive after weaning. Because the population is healthy, rehabilitation of compromised individuals is not needed to protect the species.

Feeding or attempted rehabilitation encourages seals to become dependent on humans, and they can become a nuisance or even dangerous.

The Department of Environment, Land, Water and Planning (DELWP) and Parks Victoria are responsible for the welfare of Victorian wildlife, including hauled-out seals. Report any injured seals, or seals entangled in rubbish to DELWP on 136 186 or Phillip Island Nature Parks on 5951 2800. 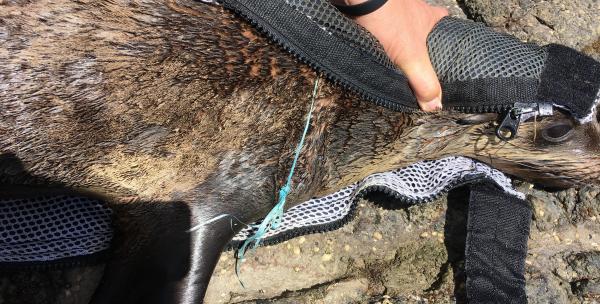