Due to staff shortages Churchill Island will be closed on Mondays and Koala Conservation Reserve will be closed on Tuesdays. We apologise for any inconvenience this may cause to your travel plans. Our best valued ticket is a 4 Parks Pass which includes booked entry to the Penguin Parade, plus open-dated entry for up to 6 months from date of booking to the Koala Conservation Reserve, Churchill Island and the Antarctic Journey at the Nobbies. Revenue raised is invested into vital research, environment, and education projects. If you feel unwell, please reschedule and stay at home. Thank you! 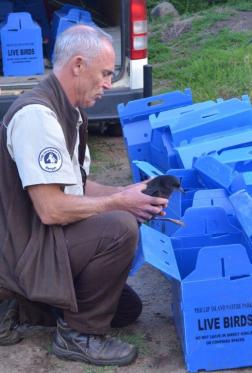 The annual short-tailed shearwater migration has arrived, and we can all do our bit to help.

The birds are known to flock to the San Remo bridge lights. As in past years, the bridge lights will be switched off for a few nights around April 25 during the peak of departure. Signs will be placed at either end to warn drivers of the changed traffic conditions.

The weaker birds are often found on the beaches unable to fly. This is a natural occurrence and we generally do not interfere as this provides a rich source of food for the near threatened Pacific Gulls (listed in Victoria), that move from their breeding sites to Phillip Island at this time of year.

Phillip Island Nature Parks’ Short-tailed Shearwater Rescue program rescues hundreds of birds each year as they begin their migration from Phillip Island to the northern hemisphere.

Short-tailed shearwaters arrive on Phillip Island around 24 September after a 16,000km migration from the waters off the Aleutian Islands near Alaska.

Shearwaters, or ‘muttonbirds’, lay one egg in the last week of November in a sand dune burrow. The egg hatches in mid-January and the parents feed the chick before beginning their migration back to the northern hemisphere in mid-April. The fat, fluffy chick is left behind until it grows its ‘adult’ feathers and begins the migration weeks after the adults leave.

While the chicks learn how to fly they often end up on roads around Phillip Island, attracted to street lights and the flat road surface. During this time, late April to mid-May, Phillip Island Nature Parks’ rangers and volunteers patrol roads and rescue wayward birds in danger of being hit by motorists.