Penguin Parade Sold Out tonight Saturday 27th February. Online tickets required for everyone (including babies) at all of our sites. See More & Save with a 4 Parks Pass.

Feral cats on Phillip Island will be fitted with GPS collars to give rangers a clearer picture of their movements and behaviour. The information will be used to support Phillip Island Nature Parks’ goal of eradicating feral cats in order to protect precious native wildlife like short-tailed shearwaters, penguins, possums and bandicoots.

Phillip Island was declared fox-free in 2017 and now the next most significant threat to wildlife is feral cats.

“We’re tracking these feral cats to help us understand their patterns and behaviour. The information we gather will help us to better manage the impact of feral cats more effectively in the future,” said Research Technical Officer Frank Gigliotti.

“We want to find out how feral cats interact with each other, where they spend most of their time and how far they travel and also use the information to evaluate the effectiveness of current monitoring tools such as infra-red cameras,” said Mr Gigliotti.

“Our goal is to make Phillip Island a safe haven for threatened species and remove the threat of feral cats. To achieve this, we need to understand how the feral cats use the landscape and the data from this project will give us a clearer picture”

Feral cats pose a significant threat to biodiversity in Australia and are identified as the major threat to the success of threatened species translocation programs such as the release of eastern barred bandicoots to Phillip Island.

The data collected from the tracking project will be used to improve control of the predators, targeting the areas and times that feral cats are most likely to be spotted. Analysing the movement patterns of feral cats will also improve estimates on their population size.

Last year, 6 feral cats were captured, collared and released to track their movements over 3 months. They were captured in cage traps as part of a larger control program, using rabbit or chicken as bait. 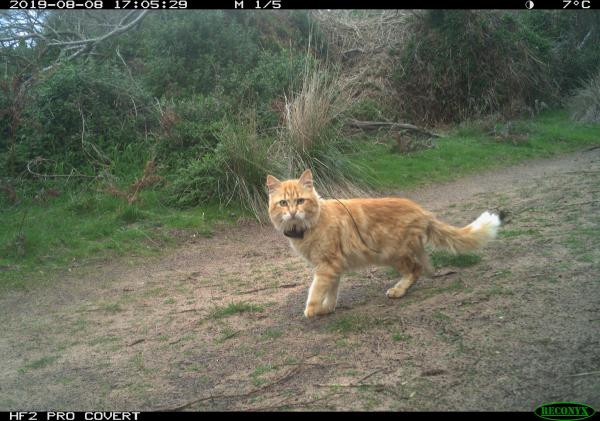