After a long break, we are delighted to be back with our regular Know Your Nature Parks column and look forward to sharing what’s happening around your Island home each month.

The Nature Parks is a not-for-profit conservation organisation. We fund our operations through ecotourism experiences at the Penguin Parade, Nobbies Centre, Koala Reserve, Churchill Island and Wild Oceans EcoBoat Adventures. Managing over 20% of Phillip Island, we care for many of the Island’s beaches and reserves - we probably maintain the access point to your local beach or the paths at your local bushland reserve!

After the busy breeding season, Little penguins have completed the process of moulting. This is when penguins go through a complete rejuvenation by replacing all of their old feathers with new ones. This gain, however, does not come without pain. The penguins have to spend about 17 days ashore, suffering from the heat, covered in fleas and ticks and with no food or water.

Before the moult, they feed intensively and almost double their body weight to withstand the long fast. During moult, you will often see penguins onshore during the day and you will definitely see scatters of feathers around their burrows. After moult, the penguins are very thin when they emerge from their burrows with their sleek new feathers which ensure they are fully waterproof and prepared for long feeding trips in the cold winter seas. They head straight out to sea to feed. During winter, their feeding trips can often take them as far as South Australia. They have no commitments on land at this time as their chicks have fledged and they have a break from their partners before they reunite for the spring breeding season. Many penguins still return to the colony during winter – perhaps just to check on their burrows and territories – the real reason why is yet another mystery of the lives of our Little penguins… 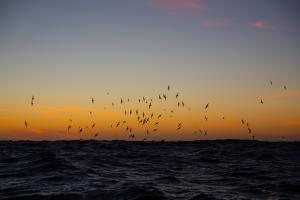 Autumn is a time when Adult Short-tailed shearwaters leave Phillip Island’s shores to begin the long flight to the Bering Strait near Alaska starting with a trip south to feed in the rich waters around Antarctica before heading north. They leave their fat, fluffy chicks behind in the burrows where they lose weight and grow their adult flight feathers. In late April/early May, the chicks take off to commence their own migration. When the chicks take these practise flights, they often ‘crash land’ on roads and end up in unusual or dangerous places, including beaches – even your backyard. The Nature Parks has just completed their annual Shearwater Rescue program where staff and volunteers remove shearwater chicks from dangerous locations and take them to safe take-off points.

How you can help during this time: 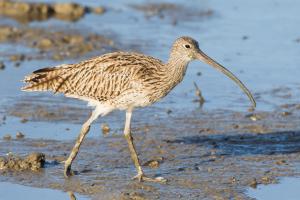 Short tailed shearwaters are not the only migratory birds leaving our shores in Autumn. Our migratory shorebirds have also taken off for their northern breeding grounds. The Victorian Wader Study Group works with land managers such as the Nature Parks to provide information on our shorebirds.  A GPS tracking project in conjunction with Darwin University for the critically endangered Eastern curlew, shows they left Western Port in early March. One bird, known as RUP, flew through Central Australia into Northern Territory where its flight path was affected by the recent cyclone. It was last recorded in Townsville, thousands of kilometres to the east! These birds will breed in Mongolia and be back on our shores in late July completing a whirlwind and amazing trip! Young Eastern curlews remain in Western Port over winter for the first four years of their life.

Red-necked stints have also fattened up and headed north to breed above the Arctic Circle. These tiny birds complete an incredible 25,000 kilometre journey between their breeding grounds on the Arctic tundra and Western Port feeding grounds stopping off at ‘refuelling’ sites along the way. Juveniles remain in Western Port until their second year.

Can you hear the Growling grass frog? 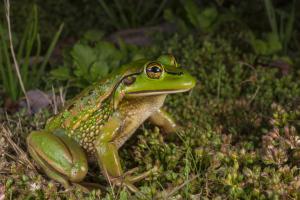 The Growling grass frog (Litoria raniformis) was once widespread across south-eastern Australia but is now classified as Endangered.

One of the largest frogs in Australia, they live in slow-moving wetland systems such as swamps, lakes and ponds with grassland habitat and emergent vegetation. These amazing frogs were recorded around Swan Lake on Phillip Island in 1991, 2001 and most recently in 2008. Over summer, Nature Parks staff and volunteers undertook extensive surveys across Phillip Island, using a combination of on-foot surveys and audio-recording equipment to listen for the iconic grumbles of the Growling grass frog. This year we didn’t find any growlers, but recorded four other species; Brown tree frog, Whistling tree frog, Eastern common froglet and the  Eastern banjo frog, more commonly known as the ‘Pobblebonk’. When the Growling grass frogs are active again next summer, we will resume the search!

If you think you hear any interesting frogs on your dam or in your pond at home, let us know - we’d love to come have a listen!

Checking on the Eastern barred bandicoots 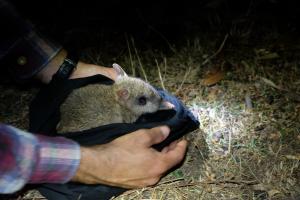 Our Conservation Team researchers recently returned to Churchill Island to monitor the population of critically endangered Eastern barred bandicoots released over three years ago in a bid to save the species. The team caught and monitored 65 individuals over three nights, 19 of these we met for the first time and were just a few months old.

There was no sign of the bandicoots breeding - as was the case on Phillip Island this month.  The dry summer is the most likely contributor to this. The dry conditions also are the most likely explanation for the poorer body condition that was observed in many of the older animals. All in all the population remains stable despite having dropped a little over a hot and dry summer. This work relies on our fantastic volunteers and staff.  We had 23 volunteers donating almost 160 hours to help us set and check the traps and record the data!  To find out more about volunteering opportunities, contact us: volunteers@penguins.org.au