Phillip Island Nature Parks attractions are temporarily closed to visitors in line with advice from the Victorian Government.

Of the entangled seals, 55 were rescued and freed. Some of the latest rescues have been captured in dramatic footage, showing the lengths scientists go to in order to rescue injured wildlife.

Injured seals are also spotted by drone and monitored. Results indicate the problem is larger than previously thought and the number of entangled seals has been underestimated in the past.

“Young Australian fur seals are playful and naïve and easily become caught in marine debris. With ever increasing amounts of plastic in the ocean, this problem is not going away,” said Marine Scientists Dr Rebecca McIntosh.

The fur seal colony at Seal Rocks off the south-western tip of Phillip Island is home to 20,000 seals. Scientists visit the colony every two months, except for breeding season, finding on average 5 entangled seals each trip, and sometimes as many as 11. Under specific research and ethics permits, a team of 2-4 researchers visit Seal Rocks freeing entangled seals when possible and recording information on the material type and injury caused to the seal.

“We have to balance disentangling seals and their individual welfare with the welfare of all the seals in the breeding colony,” said Marine Scientist Dr Rebecca McIntosh.

“Pups rely on their mother’s milk and mums need to fish. They are away for 4 days on average but can be away as long as 20 days. Every feed is critical to pup development and their health. When we are in the colony, the seals temporarily move into the water. We only visit the colony every two months to minimise any impacts.”

Most of the entangled seals are pups and juveniles, with around half of those observed with entanglements successfully rescued. The material includes commercial trawl net fragments, recreational fishing line and hooks, rope, balloon ribbon and urban rubbish like hats, plastic bags and plastic rings.

“Most plastic that enters the ocean is from urban sources. If we reduce single use plastics and dispose of our rubbish correctly, we can reduce the impact on marine wildlife. Seals are intelligent animals and can easily become caught if you are fishing near a breeding colony; it is often worthwhile fishing elsewhere” said Dr McIntosh.

Bass Strait is known for its treacherous waters, but the team is highly experienced, performing their trips when conditions are suitable. Things can change quickly, so they are always monitoring the weather and the sea.

“Slips trips and falls are something we have to be careful of, and you need to be fit and confident when catching seals, so it takes a bit of training and practice,” said Dr McIntosh.

“Seals are not aggressive outside the breeding season, but they will try to get to the water when we arrive so we make sure we stay out of their way. Males can weigh up to 360 kg, so we need to be careful.”

Scientists also use the trips to take samples of seal scats to see what they are eating, often finding microplastics that have likely come from the fish they have eaten. Pups are also measured and weighed once a year to better understand their health. 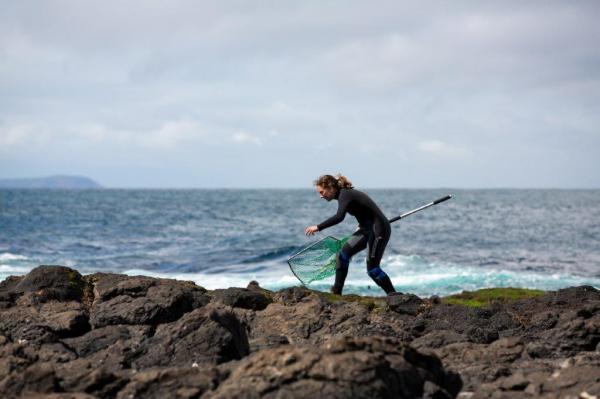